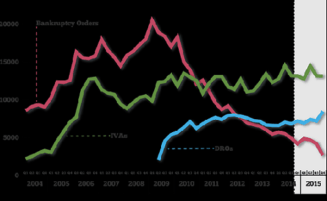 The number of people going bankrupt in England and Wales has plateaued  over the last 2 years. This is somewhat of a surprise given the rise of 10% between 2017 and 2018.

Employment in the UK is currently at record highs. Although many of the jobs created are based around the zero hour contract “Gig economy” people seem to be keeping on top of their finances.

Having said that it should be remembered that the number of people starting an IVA (the formal alternative to Bankruptcy) continues to increase.  There was a rise of 10% between 2018 and 19.

The numbers of bankruptcies and DROs has seen a dramatic fall in Q2 2020. This is likely to be the result of government handouts and loan payment holidays due to Corona Virus. This has supported people who would otherwise have used these solutions.

The reason for the stabilising numbers is likely the same as those for Bankruptcy described above. Record employment means that may people are keeping their heads above water debt wise.

The number of people who carry out a DRO in any particular quarter is traditionally higher than the number going bankrupt as it is a cheaper solution to implement. However there are strict qualification criteria which prevent many people from using this solution.

Arrange a call with a Bankruptcy Expert

After submitting your details you will receive a call from one of our advisors to ensure you have received your report. They will be happy to discuss the results if you require.

Your information will be held in the strictest confidence and used to contact you by our internal team only. We will never share your details with any third party without your permission.